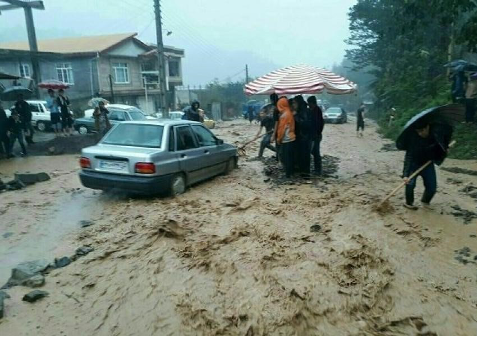 Arid and semi-arid regions present unique challenges to Flood Risk Management (FRM). It is often incorrectly assumed that such areas face insignificant flooding problems due to low annual rainfall and accordingly drought is the main natural hazard focused to be managed. However, the reality is that there is a significant concern of flooding, as shown in figure 1, due to high-intensity rainfall on relatively unstable dry lands where no well-defined structural measures exist to reduce flood damages. In comparison to humid regions where flooding occurs regularly, arid and semi-arid areas face flash floods rarely which results in low risk awareness among inhabitants and stakeholders. In addition, rainfall tends to be more variable in space and time than in humid regions. The surface soil layer in arid and semi-arid regions is rarely saturated which plays an important role in runoff production in flash flood events. Despite of being a serious natural hazard that affects arid and semi-arid areas, flash flooding remains a poorly understood and managed natural phenomenon in those regions. 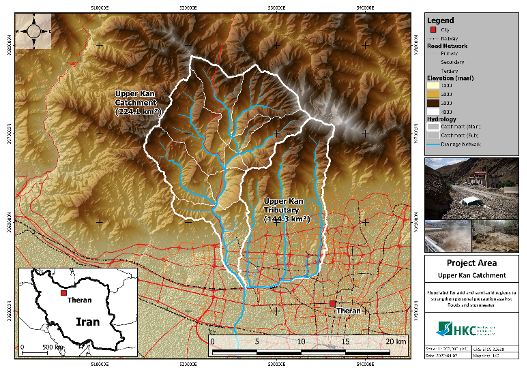 Iran faces the above-mentioned challenges with flash flood due to the climate and geographic characteristics. The country is located in an arid and semi-arid region where precipitation is rare and serious droughts occur frequently. On the other hand, short duration and high intensity of rare storms cause flash floods in small areal extent, which pose a greater risk to human life and livelihoods than regular floods. In addition, their sudden occurrence makes them difficult to forecast. Records indicate the increase in flood losses in Iran in the period of 1950 to 2000 from 17.2 to 132 million USD. Since 1990, an annual average of 43 flood events and 135 fatalities have occurred in the country. Considering the above facts, innovative flash flood risk management strategies are essential in Iran.

The Kan River basin, as shown in figure 2, is a typical case in Iran with a long history of severe flash floods due to its semi-arid climate, steep mountainous terrain, and short time of concentration. It is located in Tehran province between 51.950 - 51.374 east longitude and 35.950 - 35.775 north latitude with an area of 204.78 km2 and annual rainfall of 570 mm. The region is highly attractive for the people living in the nearby urban areas especially during weekends where they go to relax, hike, camp, and fish. There are many restaurants along the river and a religious shrine which is located in the Imamzadeh Davood village is a destination for pilgrims up to 100,000 people. Two heavy floods have occurred in this basin in the last 40 years leading to over 3000 casualties and more than 30 million USD damages. On 28 July 2015, the flash flood in the basin claimed 20 casualties within a few minutes.

It is well understood that arid and semi-arid regions like Kan River basin face challenges with flash flood due to technical precautions including the nature of flash floods, geographic characteristics, and lack of hydrological and meteorological data for developing early warning systems. In addition, organizational precautions such as capacity building of human resources, risk awareness increasing, and society engagement play pivotal roles in flood management regarding economic, social, and political aspects which are not included as a part of the existing FRMs in these regions. Therefore, it is required to establish and develop sustainable strategies and technologies for FRM in arid and semi-arid areas and consider those aspects.

To achieve these objectives, the project has been organized around four work-packages (WPs) with the following goals: 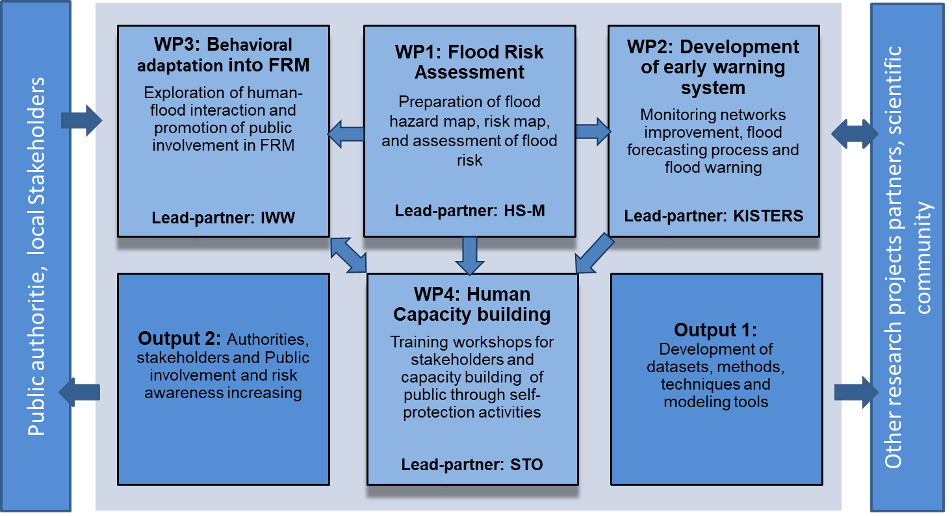